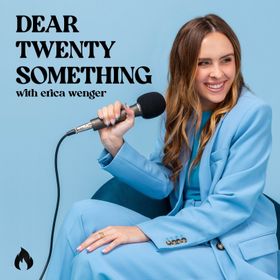 The Dear Twentysomething podcast started because we wanted to create a space for ambitious and curious twentysomethings to connect with the successful changemakers they most look up to.

A bit about me (your host!)... I'm Erica Wenger, a twentysomething entrepreneur and investor, and I'm so grateful for this badass community of twentysomethings who are here to get knowledge and be inspired!

While the twenties can be a time full of questions and doubts, we’re here to humanize the whole thing. Sometimes you’ll hear from successful trailblazers who come on to share the highs and lows of their 20s, and other times you’ll hear words of wisdom from experts who will speak on a topic relevant for twentysomethings. And then on occasion, it’ll just be me on the mic hosting an episode where I share a recent reflection or story from my own life as I too am navigating this wild decade. Thank you for being here!

Ashley Merrill: Founder of Lunya And Lahgo, Co-Founder of The Deep, And Chairwoman of Outdoor Voices

Season 2 Premiere: What to Expect & Meet the Host

Welcome to Season 2 of Dear Twentysomething!

Meg Jay: Psychologist and Author of The Defining Decade