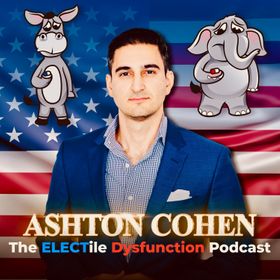 More interesting than NPR, more provocative than Only Fans. Ashton Cohen is an accomplished attorney, investor, and commentator, delivering humorous, informative, insightful, and candid discussions with some of the brightest minds in the world in the areas of politics, business, finance, cryptocurrencies, history, tech, society, culture, and the law.

The ELECTile Dysfunction Podcast rebukes political correctness and groupthink to serve as a safe space only for wit, satire, thought-provoking ideas, and stimulating conversations.

Episode 53: How Do Revolutions Start? The Rise of the Nazis, Communists, Jacobins, & Ayatollahs. Guest: Daniel Chirot

Episode 46: NFT Expert on the Present and Future of NFTs. Guest: Arvin Khamseh

Episode 43: A Transgender Man and Educator on Transgenderism, Trans Medical Procedures, and Their Impact on Children. Guest: Scott Newgent

Episode 41: Democrats as the Party of the Rich? Republicans as the Working Class Party? Guest: Yuval Levin

Episode 39: Will Cuba's Digital Revolution Lead to an Overthrow of the Communist Regime? Guest: Ted Henken

Episode 38: Bitcoin as the World Reserve Currency, How Income Taxes Fuel War, & the Future of the Nation-State. Guest: Dominic Frisby

Episode 30: Lessons From Serial Entrepreneur Who Made Over $1 Billion by Age 18. Guest: Shaahin Cheyene

Episode 22: Lies & Racism From the Media - From CRT to Rittenhouse Coverage to Waukesha Massacre

Episode 21: Elaine Parker of the Job Creators Network on Suing the Biden Admin. Over the Vaccine Mandate, Inflation Concerns, & State of the Economy

Episode 19: The Decline of Liberalism on the Left. Guest: James Kirchick

Episode 18: The 10 "Inconvenient Truths" You Are Not Allowed to Talk About

Episode 16: How Bezos & Amazon Took Over the World. Guest: Steve Anderson, Author of The Bezos Letters

Episode 14: Is the Vaccine Mandate Constitutional?

Episode 6: The Biden Administration is Saving You 16 Whole Cents on this Fourth of July!

Episode 4: The Rise in Antisemitism

Episode 3: Kaveh the Leftist Blacksmith on Israel/Palestine and Woke Politics

Introduction to our show!