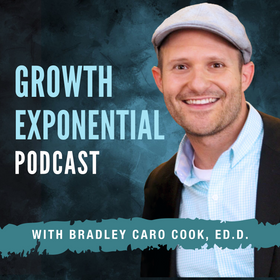 Telling the stories of non-profit leaders, consultants, and philanthropists and sharing their organization’s mission with the world to help them grow. Hosted by growth hacker and social entrepreneur Dr. Bradley Caro Cook, Executive director of CareerUpNow.org and Growth Exponential, co-founder of the Next Beverly Hills Entrepreneurship Incubator, and countless other endeavors. Since an early age Bradley has been dedicated to repairing and inspiring the world. Welcome to Growth Exponential Podcast to hear the stories of those repairing the world.

Leah Coss, Co-Founder and President of Build a Biz Kids

John Winslow, Founder at 1For1 Water

Rosy Vasquez, Founder and Executive Director of Community Through Hope

Emily Chambers Sharpe, President and CEO of House of Mercy

Katherine Judson, Executive Director of The Center for Integrity in Forensic Sciences

Tige Charity, Executive Director of Kids In The Spotlight