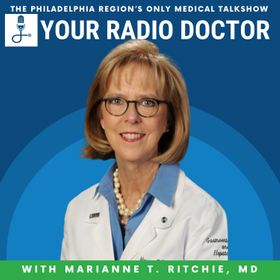 Your Radio Doctor is the Philadelphia region’s only medical talk show. This hour-long show is hosted by Dr. Marianne T. Ritchie, a Gastroenterologist practicing at Jefferson University Hospital.

Each week, Dr. Ritchie will interview guests including physicians from all specialties, researchers, and other leaders in the medical community. She will take on topics like heart disease, colon cancer, neonatal care, and many others.

Episode 137 - All About Medicare

Episode 136 - Protect Your Little Pumpkins from RSV and Tips for a Boo-tiful Halloween!

Episode 134 - More Than Just a Mammogram

Episode 128 - The Revolution in Cancer Treatment

Episode 126 - Brace Yourself: Advances in Orthodonics

Episode 125 – In Good Hands: common injuries of the hand and wrist

Episode 118 – All About Concussions

Episode 117 – Look over your Shoulder!

Episode 114 - All About Pneumonia

Episode 111 – An update on COVID vaccines/boosters and testing

Episode 108: All About the Heart

Episode 94: COPD & The Dangers of Smoking/Vaping

Episode 89: What Diet is Best for Me?

Episode 70: When To Take Your Child To The ER

Episode 67: The Aches & Pains of Arthritis

Episode 66: The Value of a Yearly Gynecologist Visit

Episode 64: The Road To A Healthy Pregnancy

Episode 55: Oral Health: Common Issues & What They May Indicate

Episode 52: How Is Internal Medicine Different From Family Medicine?

Episode 51: Take your family to the doctor

Episode 48: Medicine – Before, During & After the Pandemic

Episode 43: Medicine – Before, During & After the Pandemic

Episode 41: Update on Cancer of the Pancreas

Episode 40: When Disease Strikes Leaders: What Should We Know?

Episode 22: The Effect of the Pandemic on Sleep

Episode 19: Emergency Departments During the Pandemic

Episode 2: To Stent or Not to Stent?