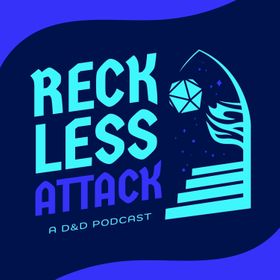 Do you love Dungeons and Dragons and other TTRPGs? Then come join us at our table! Reckless Attack is a Dungeons and Dragons 5th Edition Real Play podcast, hosted by a group of cheery, diverse, regular folks in Chicago who love their game and want to share it with you. If you want to find out more, visit us at RecklessAttack.com or chat with us on Twitter at @Reckless_Attack. Like the show and want to support us? Check out our bonus content at patreon.com/recklessattack.

Episode 50: Against the Chord Caller

Episode 49: The Dawning of the Shade and Aquarius

Episode 48: Into the Wild

Episode 46: All That and a Bag of Beans

Episode 44: A Sending and a Mino-Torn

Episode 42: The Ultimate Episode of the Ultimate Podcast of Frog Stacks, The Mothman, and Everything

Episode 41: The Light in the Darkness

Episode 40: We Rise To Defend The People

Episode 36: The Day of Returning

Episode 27: The Pious, The Seeker, The Stone

April Fools: Campaign is from France, This is Sparkling Adventure (Pt 2)

April Fools: Campaign is from France, This is Sparkling Adventure (Pt 1)

Episode 25: The Moth, The Myth, The Legend

Episode 23: Alone, Together, With You

Episode 21: To Research and Explore

Episode 20: The Vault in our Stairs

Reckless A-Talk: J & B from the Planet Arcana Podcast

Episode 14: Mind your TPs and Queues

Episode 6: Pieces on the Board

Episode 4: All the Colors of the Grung-bow

Behind the Screen 1: Players and Characters

Episode 2: Notice of the Eternal Citadel

Welcome To Our Table!