This show was the idea of David Hatch, with production by Simon Brett, but this wasn't the first time that Williams and Ray had paired up. In 1959 they had both appeared in Carry On Teacher, Ray as the Headmaster of the School and Williams as the English Teacher. Nearly a decade later in 1968, they appeared together on LWTs interview show, Frost on Sunday - a rather peculiar edition as there was a technicians strike, so the show was recorded by the management. Whilst there was a certain chemistry both times, the working relationship was not the same in The Betty Witherspoon Show.

It appears the title of the show was a one joke parady of the Simon Dee show, so popular at the time, but Betty didn't appear, either as a person or a character, instead being introduced every week, only to have Ray start his monologue 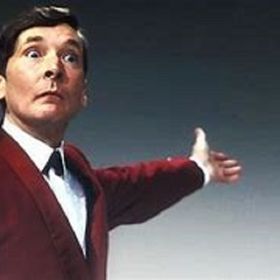 The Betty Witherspoon Show - s01e02 - Hound Of The Baskervilles

The Betty Witherspoon Show - s01e01 - A Tale Of Two Cities