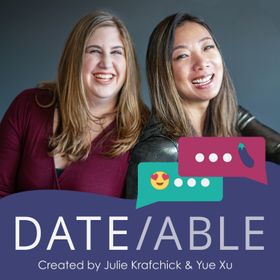 Can you find love in the time of Corona? Is monogamy dead? Are we expecting too much of Tinder? Get all the answers and more with Dateable, your insider’s look into modern dating that the HuffPost calls one of the ‘Top 10 podcasts about love and sex’. Listen in as Yue Xu and Julie Krafchick dig into why we date the way we do as they talk with real daters and experts about everything from sex parties to sex droughts, date fails to diaper fetishes, and first moves to first loves. Whether you’re looking to DTR or DTF, you’ll have moments of “OMG-that-also-happened-to-me” to “I-never-thought-of-it-that-way-before.” Tune in every Wednesday to challenge the way you date in this crazy Dateable world.

Dateable is part of the Frolic Podcast Network. You can find more outstanding podcasts to subscribe to at frolic.media/podcasts

#brunchtalk: When do you go public with your relationship?

#brunchtalk: Do you need to have sex to gauge chemistry?

S15E5: The One That Got Away w/ Vince Xu and Yurika Yoneda

#brunchtalk: How can you tell if someone likes you?

#brunchtalk: How do I stop stalking my ex on social media?

S15E2: The Secret to Enjoying Dating

#brunchtalk: How do you get better matches?

#brunchtalk: How do you not get ahead of yourself?

BONUS: The Roundup Episode that'll change your perspective on dating

#brunchtalk: How do you get over a breakup?

#brunchtalk: Is having a friends with benefits helpful or harmful?

#brunchtalk: How do you know if you're rushing into things?

#brunchtalk: When's the right time to introduce someone to your friends?

#brunchtalk: Who should pay for the first date?

S14E20: So Tell Me About the Last Time You Had Sex w/ Ian Kerner

#brunchtalk: How do you know if they're 'The One'?

#brunchtalk: Should I leave a relationship that's good but not great?

#brunchtalk: Should I date my co-worker?

S14E17: A New Definition of Family

#brunchtalk: Can you stay friends with an ex?

#brunchtalk: When should I have the DTR convo?

#brunchtalk: Why do I keep getting rejected?

#brunchtalk: Is there a future when one partner earns more than the other?

#brunchtalk: How Can I Stop Being Jealous of My Friend's Relationships?

S14E11: Performance Anxiety (In the Bedroom)

#brunchtalk: What's the difference between being too picky and settling?

S14E10: From No Relationship Experience to Engaged w/ Sydney Lotuaco

#brunchtalk: How can I stay emotionally open when I've been burned?

#brunchtalk: What should I do when my ex comes back?

#brunchtalk: Is Bad Sex a Dealbreaker?

#brunchtalk: What To Do When They Don't Text Back

S14E5: Have You Had a Microwave Relationship?

S14E3: Who Will You Meet in the Wild? w/Will Rocklin

S14E1: Who's Showing Up For Your Date? w/ Lair Torrent

BONUS: Date the Way You Want To Be Dated

BONUS: How to Thrive or Survive V-Day

BONUS: Are you in a Relationship or a Situationship?

S13E16: How To Have A Healthy Relationship w/ Connor Beaton & Vienna Pharaon

S13E15: The Pressure To Settle Down w/ Bernice Ye

S13E9: The Future is Pansexual

S13E8: He's Just Not That Into You w/ Greg Behrendt

S13E4: Are You Busy Avoiding Intimacy?

S13E3: Confessions of a Reformed Ghoster

S13E2: How to Fail at Being a F*ckboy w/ Kane Holloway

BONUS: Will We Ever Meet IRL Again? w/ the California Groundbreakers

BONUS: How do I turn a Match into an Actual Date? w/Dawoon Kang of CMB's Save The Date

BONUS: Is it a Dick Pic if it's not your Dick? w/ Kane Holloway & Greg Behrendt of 'Don't Take Bullshit from Fuckers'

BONUS: Are you ready for a Post-COVID Dating Tsunami? w/ Kimmy Seltzer

BONUS: Identity & Intersectionality Across the Rainbow

BONUS: Are you Dateable? w/ Nikki Novo from The Final Swipe

BONUS: What you know bout love

BONUS: Setting your 2021 Intentions (for love)

S11E18: How you're wired (for relationships)

S11E7: Hacks to Looking your Best

BONUS: Love & Dating in the Time of COVID w/ Minji Chang from FirstofAll

Season 10 Episode 16: Relationship. Are you sure you want one?

Season 10 Episode 6: Coming out as Bisexual in your Marriage

BONUS: Confessions Of A Bartender LIVE from Mad River in NYC

BONUS: Live from The Wing NYC: Love (& Sex) At Any Age w/ Cirkel

Season 9 Episode 19: The Next Chapter Of Dating

Season 9 Episode 18: Is Monogamy A Thing Of The Past?

Season 9 Episode 17: Getting (that Libido) Up

Season 9 Episode 14: The Science Of Dating

Season 9 Episode 2: Dating the CEO of a Startup Part 2

Season 9 Episode 1: Is There Still Sex In The City? with Candace Bushnell

BONUS: Our Top Episodes That Have Changed How We Date And Find Love

BONUS: Everything you need to know about dating on 'The Wise Woman Podcast' with Erin Rachel Doppelt

Season 8 Episode 17: Can a Man Still Date in the #MeToo Era?

Season 8 Episode 8: Breaking out of an Abusive Relationship

BONUS: Check in with Past Guests Part 2

BONUS: Check in with Past Guests Part 1

Season 7 Episode 21: Single and Lovin' it

Season 7 Episode 16: At My Service

Season 7 Episode 14: Nothing to Lose

Season 7 Episode 8: Friends with (other) benefits

Season 7 Episode 3: Therapy for a Therapist

Season 7 Episode 2: What it means to be a man

Season 6 Episode 8: Open to being Open

Season 6 Episode 4: Weeding them out

Season 6 Episode 2: When Dating IS Your Job

Season 6 Episode 1: The Great Love Debate In Every State

Season 5 Episode 15: In Sickness and in Health

Season 5 Episode 7: I am not throwing away my shot

Season 5 Episode 5: Getting out of the Friend Zone

Season 5 Episode 4: Yes, I have herpes

Season 5 Episode 3: An insider's look into the pickup community

Season 5 Episode 1: The Secret to Dating in Modern Times

Bonus: Check in with Past Guests (Part III)

Bonus: Check in with Past Guests (Part II)

Bonus: Check in with Past Guests (Part I)

The Why Series: Why can't I meet people in real life?

The Why Series: Why do people flake or ghost even after a great date?

The Why Series: Why do I go on date after date and none of them lead to anything?

Season 4 Episode 17: My Journey to be a Better Man

Season 4 Episode 16: Why You Cannot Find "The One"

Season 4 Episode 14: Going with the Flo

Season 4 Episode 8: Love in the Air(bnb)

Season 4 Episode 1: Dating in the Dark

Season 3 Episode 17: Against the Rules

Season 3 Episode 6: Dating the CEO of a Startup

Season 3 Episode 3: Dating on a Whim

Season 3 Episode 1: You are someone I just have to meet

Season 2 Episode 9: How far would you go for love?

Season 2 Episode 5: Plus One

Season 2 Episode 4: Are we asking too much of Tinder?

Season 1 Episode 10: Are you opposed to hooking up?

Season 2 Episode 10: Confessions of a Matchmaker